Economic Brief: All Eyes On Inflation For The Remainder Of 2022 - Lauterbach Financial Advisors Skip to content

Economic Brief: All Eyes On Inflation For The Remainder Of 2022 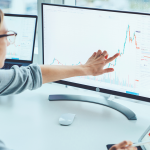 While there’s always uncertainty in the outlook for the economy and financial markets, a confluence of events has pushed the level of uncertainty to high levels, namely the Federal Reserve’s battle against inflation, Russia’s invasion of Ukraine and ongoing supply chain struggles. The markets have already priced in these risks, explaining why stocks and bonds have performed poorly this year.

We believe the two biggest risks to the economy are the war in Ukraine dragging on and inflation running hotter than markets expect. In addition, the effects of reduced fiscal stimulus, significantly tighter monetary policy and the stronger U.S. dollar are likely to result in slower economic growth, with in our opinion, the chance of recession in the next 12 months increasing to 30%-50%.

Although GDP growth is expected to slow, the unemployment rate should stay low through 2023 at around 3.6%. Monetary policy is still loose, with negative real rates of interest; there is still some fiscal stimulus; and both corporate and consumer balance sheets remain strong.

As the year began, many pinned their hopes on the economy shaking off the worst impacts from the COVID-19 pandemic—with expectations that reopening economies would ease supply chains and inflation. However, by midyear, it became clear that the ramifications aren’t abating as quickly as anticipated. In June, the consumer price index rose 9.1%, the fastest pace since 1981. Gasoline, housing prices and food were the largest contributors to this increase. The core index, which excludes food and energy, only fell slightly in June to 5.9% from 6.0% in May and well above where it was last June at 4.5%.

The Fed has responded to the sharp rise in inflation by hiking interest rates, though the June numbers may mean that the bank will speed up the pace of increases. Both stocks and bonds tend to perform poorly during high inflation regimes, like the one we are experiencing now. As such, financial plans should consider that there might be a negative impact on future economic growth, leading to lower equity returns. 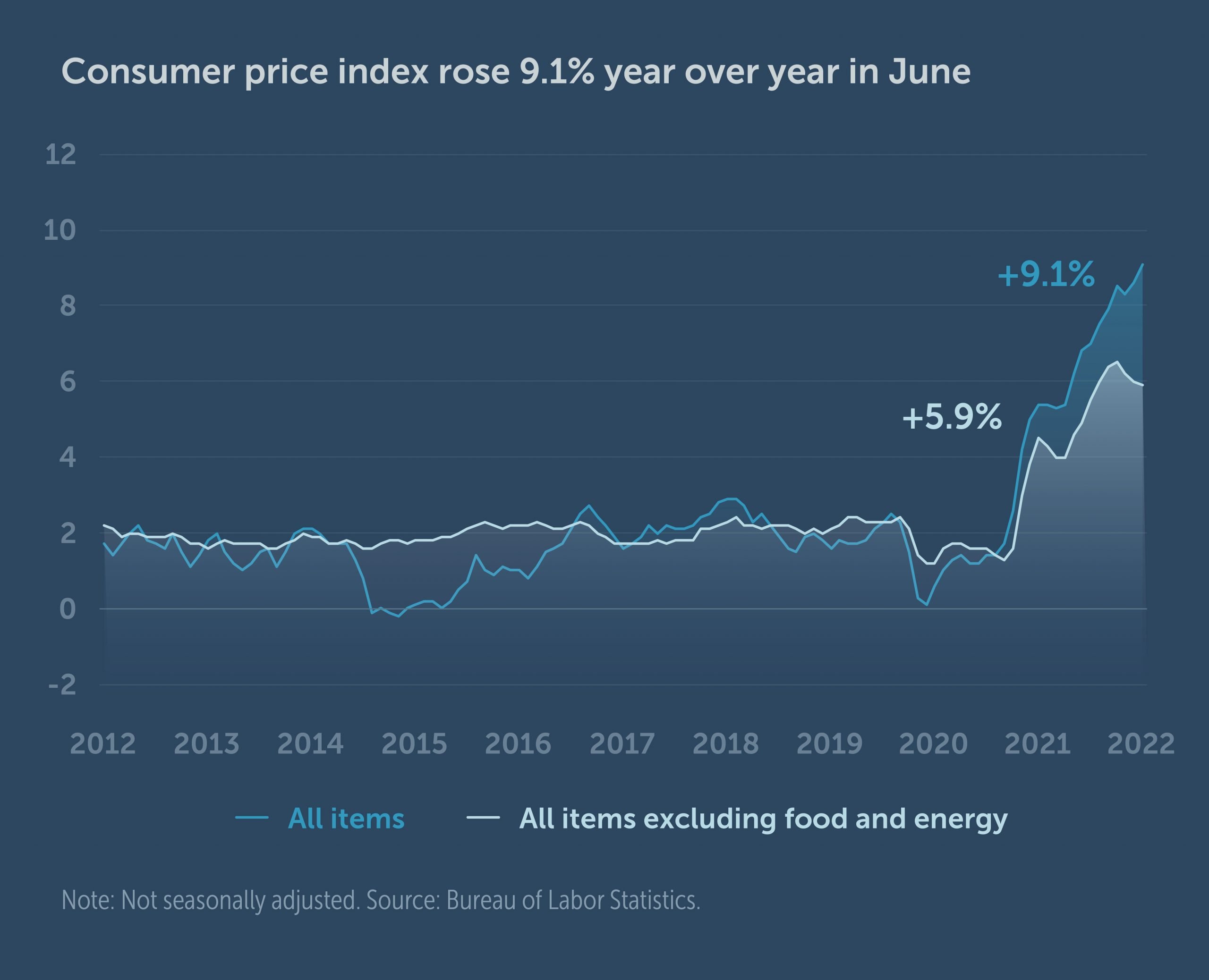 The Fed has a difficult task in fighting inflation. The risk that the Fed is behind in tightening policy enough to slow inflation is growing, which could lead to the bank raising rates higher than the market expects. The Fed will also begin reducing its balance sheet by almost $100 billion a month in September, an unprecedented amount that could push rates higher than currently priced into the market—a negative for both stocks and bonds.

Economic sanctions on Russia have created further supply and inflation problems. Global supply chains rely on Russia for its oil and gas, wheat, and semiconductor exports. Russia is the main supplier of gas to several European countries, with Germany and Italy at greatest risk if Russia cuts off gas shipments to them. This would have a significantly negative impact on their economies, almost certainly producing a recession with global implications.

The pandemic disrupted supply chains, leading to inflationary pressures. This has implications for markets because the globalization of supply chains had a deflationary impact on prices. Innovations like just-in-time inventory management—which provides the minimum amount of inventory to meet demand—led to improved productivity, profits and economic growth. Supply chains have yet to recover, which could lead to more onshoring, resulting in higher prices for consumers and lower corporate profits.

The tight labor market is contributing to inflation and could pressure corporate profits. The U.S.’s strong economic recovery since the pandemic downturn contributed to a tight labor market: almost two jobs are posted for every unemployed person, and the unemployment rate is down to 3.6%. Many workers also retired early during the pandemic, raising pressures on wages. The move to onshore jobs will add further tightness to the labor market, and higher wages could squeeze corporate profit margins.

The stronger dollar has negative implications for global economic growth. As the Fed has raised interest rates faster than other central banks, the dollar has strengthened against other currencies. A stronger dollar makes U.S. exports more expensive for foreign buyers. Corporate profits may also take a hit because the stronger dollar weakens the earnings of U.S. multinationals. That could lead to lower earnings forecasts and lower price-to-earnings (P/E) ratios.

There has been a sharp drop in consumer confidence. The Conference Board’s expectations index—based on consumers’ short-term outlook for income, business and labor market conditions—fell to 66.4 in June, the lowest level since March 2013, from 73.7 in May, signaling increased risk of a recession. The University of Michigan consumer sentiment index also reached a record low of 50.0 in June. Lower consumer confidence could slow spending and economic growth.

Housing costs, especially rents, keep rising. Housing represents about one-third of the CPI, and because of the way it is calculated, it works with a significant lag. Rents have been rising sharply and will likely continue to do so as housing supply is limited, and labor markets are strong. That will create upward pressure on rents and the CPI. Higher rents also could create a substantial burden on budgets and reduce consumer spending. 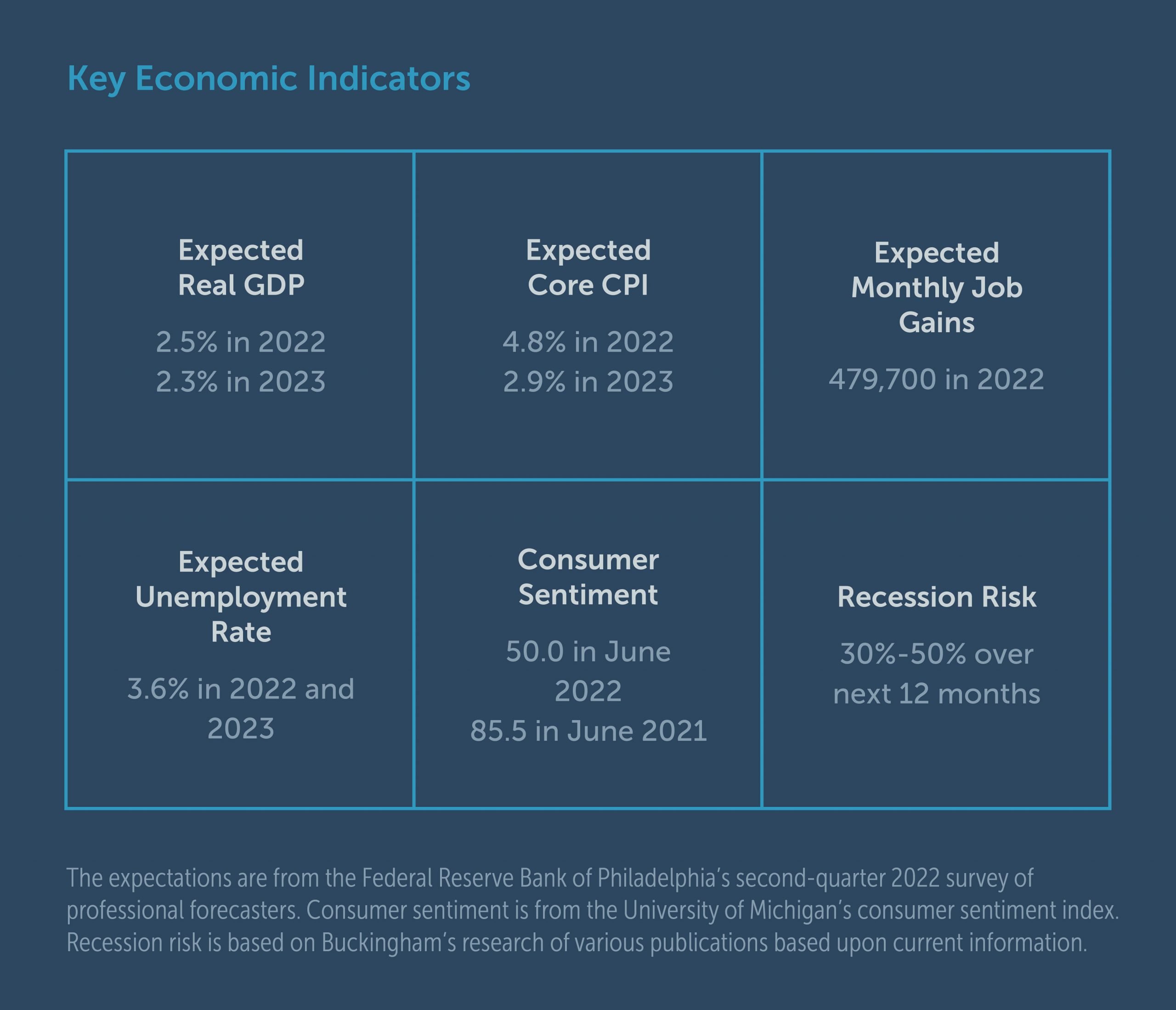 Investors dislike uncertainty—when the risk of a negative outcome increases, they demand larger risk premiums, driving P/Es down. Although this means companies are expected to have lower earnings, lower stock valuations may provide opportunities for patient investors.

Unfortunately, since not even good forecasters can tell us what is going to happen, the best you can do is make sure your plan anticipates negative shocks appearing regularly and addresses risks you are most concerned about, reducing them to an acceptable level.

Investors should always build the risk of an unexpected “black swan” event into their plans.

For informational and educational purposes only and should not be construed as specific investment, accounting, legal, or tax advice. Certain information is based upon third party data which may become outdated or otherwise superseded without notice. Third party information is deemed to be reliable, but its accuracy and completeness cannot be guaranteed. Neither the Securities and Exchange Commission (SEC) nor any other federal or state agency have approved, determined the accuracy, or confirmed the adequacy of this article.

The post Economic Brief: All Eyes On Inflation For The Remainder Of 2022 appeared first on Buckingham Strategic Partners. 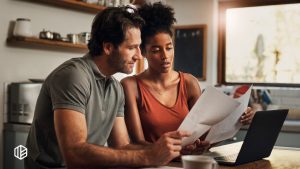 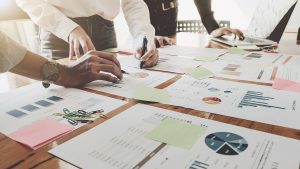 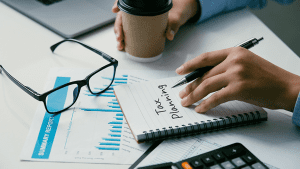